Location Manager and Fixer for a TV Shoot in Naples 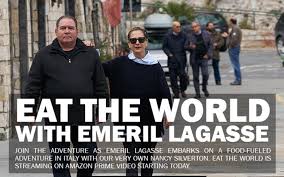 Emeril Lagasse hosts a six-part series around the world in which famous chefs introduce him to their favourite dishes. In Italy, chef Nancy Silverton wants Emeril to try ‘the best Napolitan pizza’ and takes Emeril around the Campania region of Italy to sample the local ingredients that make Franco Pepe's pizza so perfect. When Emeril gets his first taste of the finished pie straight from the oven, it's love at first bite.

We worked with the chefs and the production company Ugly Brother Studios to identify and pre-interview the on-camera talent and prepare a shooting schedule. As their location producers, we organized access to all locations (which included the Amalfi Coast and Caserta in Campania), hired local crew, arranged accommodation, catering and crew transportation. An important part of our work is translation, both in the pre-production phase and also during filmed interviews.