Location Manager for a Multi-Location Shoot across Europe 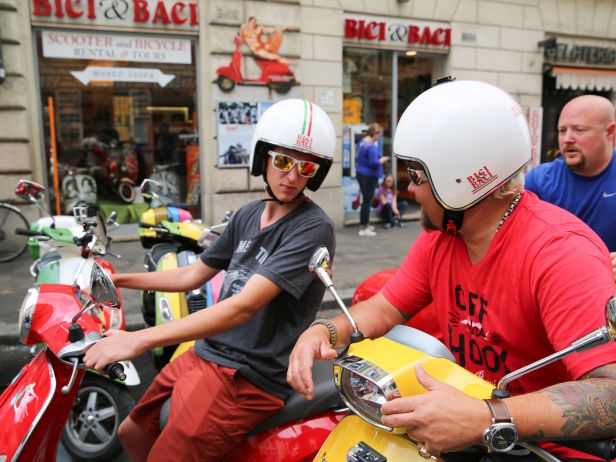 Fixer and Location Manager Fabio Di Segni was asked to provide the on-location production services for a TV shoot for the Food Network. The TV program GUY AND HUNTER’S EUROPEAN VACATION would follow TV personality Guy Fieri and his son Hunter, as they travelled across Europe, filming in 7 different countries, starting in Greece and passing through Italy, Germany, Switzerland, France, England and finishing in Spain.
No European tour would be complete without a visit to Venice, Italy. As Fixer and Location Manager, Fabio was also responsible for a large part of the pre-production, and it was up to him to suggest activities and locations in Venice to film. The challenge was to come up with a shooting itinerary in Venice that would appeal to both the presenters and the TV audience. Given Guy Fieri’s passion for Venetian cuisine, a visit to the Rialto Market was top of the list of things to do! And who can visit Venice without going to Murano to see the famous glass blowers. Part of a fixer’s job is to choose the right location, and while there are many glass-blowers in Venice, not all of them can accommodate a TV crew. So, on the location scout, Fabio took care to choose a Murano glass factory that was spacious and where the owner and workers were happy to be filmed. In fact, the shoot went so smoothly that Guy Fieri and Hunter even tried their hands at blowing some glass!
The Venetian gondola is an icon of Venice, and Hunter wanted to try ‘driving’ a gondola. Fabio’s contacts in Venice meant that he was able to find an excellent gondolier who spoke English and was happy to allow a complete beginner to take the oar of his precious gondola!
Other Italian cities we filmed in included Parma, with a trip to a producer of Parmesan cheese and Parma ham! And of course, the Eternal City, Rome. And among the many activities scheduled, one was a Vespa tour of Rome that took in just about all the major sights!
As the fixer on location, Fabio Di Segni was responsible for organizing all the TV crew transportation, film permits in Milan and all through Europe, TV crew accommodation, and journalist passes to the Expo. An important aspect of a shoot that is lengthy and tiring for both TV crew and presenters is to plan an efficient shoot schedule that maximizes the efficiency of the TV crew’s time, and allows some down-time for everyone.
In fact, the shoot was so productive that what was anticipated to be a one-hour TV program extended to a six-part series!
You can see part of the episode in Italy here